Microsoft Ignite 2022 has started and is not disappointing with the announcements coming out. During the keynote this morning, Executive Vice President Scott Guthrie announced the private preview of the next major version for SQL Server. With this announcement, not all of the new enhancements and new feature details are publicly available, however some of the exciting features announced during this keynote are: 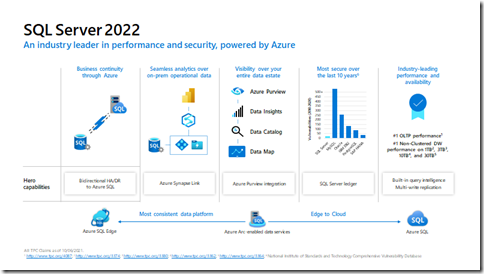 Currently, if you are moving data from your on-premises SQL Server databases to Synapse requires the creation of ETL processes. This all changes with the introduction of Synapse Link for SQL Server 2022 by providing automatic change feeds that capture the changes within SQL Server and these changes into Synapse analytics providing the near real-time analysis and hybrid transactional and analytical processing with minimal impact on your operational systems.

With the recent announcement of Azure Purview becoming generally available as a unified governance and management service, SQL Server 2022 integrates with Azure Purview to provide greater data discovery allowing you to do things like:

For the last couple of release, Microsoft have been enhancing query intelligence to provide increased performance and improved decisions around query plans. SQL Server 2022 takes this further again with the introduction of parameter sensitive plan optimizations

I am a Microsoft Data Platform MVP as well as a Microsoft Certified Master working as the Principal Consultant here at SQL Masters Consulting. When I am not working with the SQL Server Stack I like to get away to the Snow and spend time Snowboarding.